The U.S. jetted off from Afghanistan – Biden defends their exit

To recap, since the past 20 years, the U.S. had been investing billions of dollars on equipment training the Afghan army, along with NATO i.e. The North Atlantic Treaty Organization, only to now jet off and withdraw its hold from Afghanistan. In order to ensure that the Taliban are curtailed and restricted to take over the country again, the U.S. Troops along with NATO had been maintaining a stronghold over it. Even a new democratically elected government was formed, under their presence.

Even though the tensions were prevalent, it accelerated when quite recently the U.S. government announced its decision to completely withdraw its forces from the site between May 1st and September 11th this year i.e. the 20th anniversary of the horrific 9/11 attack on the World Trade Center. By the 4th of May, the Taliban launched an attack on the Afghan forces in the southern Helmand Province of the country along with 6 other provinces. Despite being ousted, they were still operating from within and outside the country. By June 22nd, they further launched attacks in the north part of Afghanistan. In no time, they captured 50 provinces, alarming the global community enough, but failing to take a stand against it, as reported by Faye Dsouza.

Soon after, the U.S. government decided to jet off entirely and hurriedly, despite the distraught situations. Soon after this, on Sunday 15th August, the Taliban declared an insurgency on the capital city of Kabul, wherein the now-former Afghan President, Ashraf Ghani fled the country, abandoning its people, leaving behind the women and the children in the heedless hands of the Taliban. No efforts were made by the global community to try to deter the Taliban from proceeding other than the local Afghan army, which was no match to the opponents’ troops and equipment.

Click here to know more, about how the Taliban seized Kabul 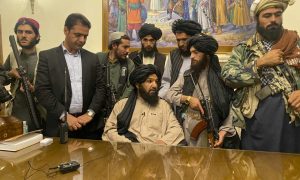 Taliban fighters take control of the Afghan Presidential office after Ghani fled the country. Source – The GuardianPresident Biden then returned from a planned vacation at Camp David, to Washington to address the nation and the criticisms over this decision. He then defended his decision on the exit of the U.S. from Afghanistan and also shifted some of the blame to the Afghans who received years of training and billions of dollars in equipment.

He stated “We will defend our people with devastating force if necessary, I stand squarely behind my decision. After 20 years, I’ve learned the hard way that there was never a good time to withdraw US forces. The mission in Afghanistan was never supposed to be nation-building. The truth is, this did unfold more quickly than we had anticipated. We gave them every chance to determine their own future. We could not provide them with the will to fight for that future.”

Ghani broke the silence through a video message, on 18th August, claiming that he’s in UAE, to “avoid bloodshed”, to “avoid disasters”. Moreover, he refuted any claims of fleeing with “cars full of money.” He further, thanked the Afghan defence forces for putting up a fight with the Taliban. He said “My respected people, my brothers, and sisters, the hope that has been lost will be back with you soon. And in Afghanistan, there will be peace and stability. The country will go on in the direction of improvement. My focus and my promise to my people is a peaceful life. The bloodshed must end so that Afghanistan can move towards peace, stability, and development. This is my priority aim. ”

“I wanted to transfer power to the Taliban peacefully. But I was evicted from Afghanistan against my will. The allegation that I took money from Afghanistan is baseless. You can verify this with UAE Customs. I did not have time to change my shoes. My security asked me to leave as it was imminent to me as head of state. “