Crimes against women: How to avoid being stabbed to death?

*Erudition through a story – the crime of a woman.*

Once upon a time in Athens, there lived a woman, enchanting and ethereal. She had eyes more beautiful than the moon, greener than the ocean and skin more illuminating than the sand of Paros. She was known for her artistry and charm and had many suitors, but all in vain as she was the priestess of Athena, the Goddess of Wisdom, and had given up all worldly treasures. Visitors spoke highly of her beauty, and of her lush hair that rivalled Athena herself.

One day, Medusa was doing her daily prayers, when Poseidon (God of the Sea) was so enticed by her beauty that he descended on Earth and then, he r*ped her. Assaulted by a God, a helpless Medusa laid under the haven of her goddess and pleaded her to prevail justice. Athena, filled with jealousy from the tales of Medusa’s beauty, and rage from her blemished maidenhood, punished her for Poseidon’s crime. She cursed Medusa for luring and seducing him into the assault and turned her into a hideous figure who had snakes for hair. Medusa was sent off to perish on an island. It was said that if any human looked into her eyes, they would turn into stone. Legend suggests it was to prevent anyone from looking past her horrid appearance and ever loving her.

Welcome to the 21st century where reality is not too different; women are sexually assaulted, looked upon as the ‘inferior’ gender, and justice rings dry under the ruse of victim blaming. Is it really her clothes or her outspoken attitude? Is it her confidence or her shyness?

The answer is no, it’s neither this nor that. Demons do not need an object or a person to carry on devilish activities. Neither do r*pists. Every time the news headline talks about r*pe or assault, women fall into the oblivion of their trauma, their pain, their filth. Is it too hard to understand that nobody, absolutely nobody, deserves power enough to assume control over someone else’s body?

Every woman, at some point in her life, has been touched inappropriately, eve-teased, glared upon or has been made to feel extremely uncomfortable in a man’s presence. Crime is a crime; we need to speak up, listen, prevent and report. The most alarming fact is that people keep their suffering to themselves in fear of social alienism and justice gets doomed. Assault is still considered being a filthy secret, hedged about with so much blame and shame that victims feel they cannot come forward. This is a testament to how far we still have to go.

A video recently made the rounds on the internet. In the said video posted by ‘Tatva India’, a woman is seen getting stabbed as many as 40-50 times by her husband. All of it happened during the day – in a busy street of Delhi, that had at least 20 witnesses. For what feels like infinity, they watched. They stared as if watching a tv serial far removed from their reality. A man took another video on his mobile, that was also circulated.

Is it that normal to witness a murder? Is it that easy to kill someone? The culprit can be seen threatening the bystanders as he continues to stab the dead wife. There were enough present in that mob to tackle this monster, and save a life. No one did.

And what exactly was the fault of this woman, you ask?

She wanted to continue working. According to several news reports, the man had a problem with the woman working at the hospital and “suspected” her of having an affair. And as an adult, he chose to ‘end his pain’, by ending her life. 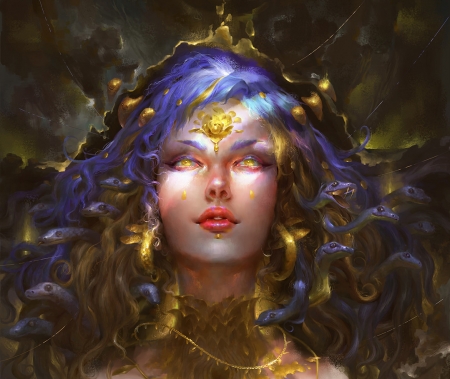 It is very easy to run out of words, be dazed for a few seconds and move on. No one will remember the fate of the woman who was stabbed on that street. Worse, the murderer was her husband, who had vowed to love and protect her till the end. The man was shortly seen sitting on a pavement for a water break, as if tired from a mere sport. Crimes like these are not confined to a particular caste, area or even privilege. They can happen to anyone. And no one deserves the suffering or living their entire lives in fear.

Medusa shouldn’t be looked upon as a figure of filth and disgrace, rather as a survivor, a hero.

The priestess is almost angelic, even with venomous reptiles for hair. Yet her penetrating eyes of inlaid silver recall her petrifying gaze. She is a talisman of protection, those eyes simply warding off evil. Today, she endures as an allegorical figure of a fatal beauty. Or, a ready image for superimposing the face of a detested woman in power. Today, Medusa is the epitome of empowerment, justice and persistence. Today, Medusa can sustain, she can fight, for she is not alone.

Read more about the story