Heartbreaking Story Behind The Viral Image of Migrant Worker Crying

A photograph of a man on the phone, his face showing his anguish, was recirculated widely on various social media platforms. However, this image has a disheartening and dispirited story that has melted everyone’s heart. The image was shot by the Press Trust of India (PTI) photographer, Atul Yadav. The picture was clicked recently, during the ongoing nationwide lockdown due to COVID-19. This powerful image captures the agony of migrants across India. 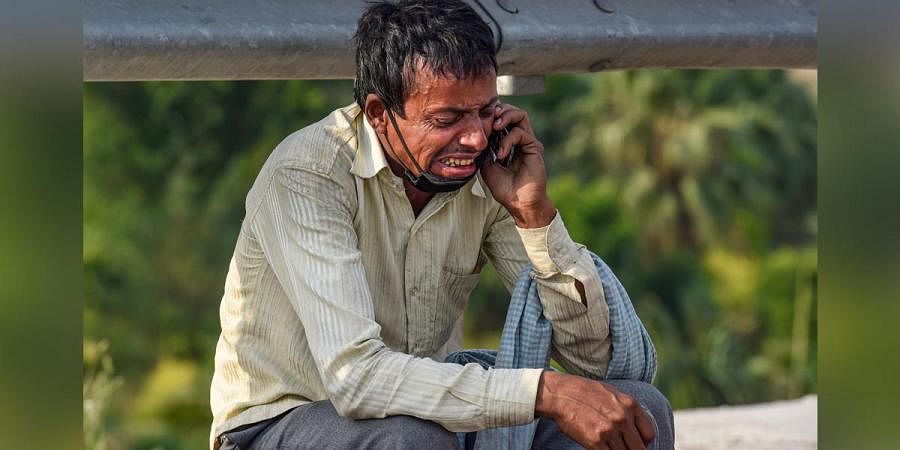 The name of the migrant is Rampukar Pandit, who was found sitting on the Delhi roadside. His home is in Bariarpur in Begusarai, Bihar, which is about 1,200km away from Delhi. He was talking on the phone and was crying uncontrollably on the Nizamuddin Bridge. Pandit worked as a labor in Najafgarh. His journey was cut short, as the Ghaziabad police officers did not allow him to travel any further. Even they cannot be blamed as they were carrying on their duty. Since then, he was stuck under the bridge. He was provided with food by some NGO workers and police officers, and he slept there itself.

When the photo was first published, it had been about three days since he was left stranded. Even more heartbreaking tale is that he did not just want to go home; he was one his way to meet his dying son. The image was clicked when he reacted while talking to his relatives over the phone regarding the same. Moreover, he worried whether he would be able to meet his son for one last time or not.

Soon this photo was published by PTI. The image of a tormented father had struck a chord with one and all.

On Thursday, officials from the East district of Delhi dropped him at the New Delhi Railway station. From there, he boarded the Shramik train to his native place, along with hundreds of other migrants. The moment he reached there, arrangements were made for his screening in an MCD school. Unfortunately, by the time this news started to be covered by major media organizations, reports came out that his one-year-old son had lost the battle of life due to stomach infection. Worst of all, the family had to carry out the last rites of his son without him.

It is regrettable to see that a father had tried everything, to see his son for one last time but lost due to his helplessness.

Air in Delhi has started getting Contaminated Again

As the fog increases in the capital, the air in Delhi has started getting contaminated again. Delhi people are forced to breathe in the...
Read more

The Union Health Ministry recently detailed how information about the Covid-19 vaccine would be disseminated across the country. The communication strategy seeks to "disseminate...
Read more
Advertisment

IIT Guwahati to host its 13th Annual Entrepreneurship Summit: Udgam 2021: Building For Billions, from 15th to 24th of January 2021

UDGAM is the Annual Entrepreneurship Summit of IIT Guwahati where people interested in entrepreneurship meet, discuss, explore, share, debate, and have fun to spread...

What is Stealthing, anyway? In the simplest terms, Stealthing is an act of non-consensual condom removal during sex. The male partner tries to damage the...

Should You Take A Gap Year? The Concept Of Gap Year

The class of 2020 is considered to be one of the unluckiest class of all time. From not being able to spend the last...