Indian Archer Deepika Kumari won three gold medals in the Paris Archery World Cup in Stage Three. Deepika scored a hat-trick in the competition by winning gold medals in individual, women’s doubles, and mixed doubles. Due to her stellar performance, Deepika has now become the world’s number one archer.

Deepika first won the gold medal in the recurve individual event by defeating Elena Osipova of Russia 6-0. Deepika won the first set 29-27 and then won the second set 29-28 to take a 4-0 lead, and in the third set, Deepika won 28-27.

Marvel of Husband and Wife

In the final bout of the mixed doubles recurve event, Deepika Kumari and her husband Atanu Das explained why they are India’s biggest medal hopeful at the Olympics. In the final match with the Netherlands, Deepika and Atanu were given a tough fight by the rival team. At one point, the matter was tied in a 2-2 set. But after this, the Indian pair performed brilliantly and won the match 5-3.

Jharkhand Chief Minister Hemant Soren has congratulated her on winning the gold medal in the World Cup. CM tweeted, “amazing! Today the record is being made by arrows and arrows. Many congratulations and blessings to the pair of Deepika Kumari and Atanu Das, who gave the country a golden moment by winning the gold medal in the recurve mixed team event of the Archery World Cup.”

In another tweet, he wrote, “Many congratulations and blessings to the daughters of Jharkhand – Deepika Kumari, Komolika Bari, and Ankita Bhagat – who made the country proud by winning the gold medal in the Archery World Cup. The whole country and the state are proud of you. Jai Jharkhand!” 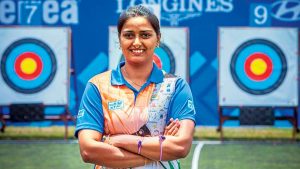 Deepika became the second Indian woman to achieve world number one rank after Dola Banerjee in June 2012, when she won her maiden individual recurve World Cup gold medal in Antalya, Turkey. She will be the country’s only female archer competing in the Tokyo Olympics next month.
- Advertisement -
June 30, 2021