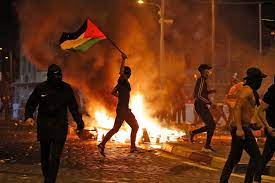 The current Israeli-Palestinian struggle can trace its roots back to the mid-20th century. For more than a century, Jews and Arabs have struggled to be the masters of the land between the River Jordan and the Mediterranean Sea.

This originates back to when Britain took control of Palestine after the central powers namely- Germany, Austria Hungary, and the Ottoman Empire lost in World War I. The Ottoman Empire consisted of the present-day Middle East where Palestine is located. A Jewish minority and Arab majority occupied this land. The international community gave Britain the task to establish Palestine as a national home for the Jews, which lead to problems between the two communities. For Jews, Palestine was their ancestral land, but since it was home to many Arabs too, they weren’t ready to it give up.

Between 1920-1940, many Jews from around the world started settling in Palestine. This included the ones who had suffered the Holocaust of World War II. This led to violence between the two communities that had a claim over Palestine. Simultaneously, there was also growth in violence against the British throne.

In 1947, the United Nations voted for Palestine to be split into two separate states, one for each of the parties. Jerusalem which is considered to be holy by both the communities was planned to be converted into an international city. This was anticipated to be the end of the conflict but it didn’t go as expected. This plan was accepted by the Jewish leadership but rejected by the Arabs and was never implemented.

Unable to solve the problem, the British rule left the throne following which the Jewish leaders declared the creation of Israel. This has led to a civil war-like condition in the area as many Palestinians objected to the formation of Israel. Eventually, troops from neighbouring Arab countries got involved. Hundreds of Palestinians were forced out of their home.

Once the war ended, most of the land was controlled by Israel. Both sides actively blame each other as the issue never got resolved. Most Palestinian refugees and their descendants live in Gaza and the West Bank and neighbouring Jordan, Syria, and Lebanon. Israel claims the whole of Jerusalem as its capital (backed by the united states), while the Palestinians claim East Jerusalem as the capital of a future Palestinian state. Currently, the portion of Palestine which is occupied by Arabs is called Gaza. Gaza is ruled by a Palestinian Sunni-Islamist fundamentalist, militant but nationalist group called Hamas, which has fought Israel many times. Peace talks have been taking place on and off for more than 25 years, but so far have not solved the conflict.

In October 2020, a court in Israel ruled to forcibly evict 12 Palestinian families from Sheikh Jarrah, a town located in eastern Palestine. This ruling has amplified the existing tensions between Palestinians and Israeli settlers. Things have escalated since the start of the holy Muslim month of Ramadan in mid-April 2021, with nightly clashes between police and Palestinians. Due to the court ruling, as many as 550 Palestinians face the danger of getting displaced.

Sheikh Jarrah is home to around 3000 Palestinian refugees. these refugees were ethnically cleansed from their homes in other parts of Palestine during the 1948 war. During an agreement, these families were promised housing and land in Sheikh Jarrah and were always supposed to get ownership after a span of 3 years. This never happened as a consequence of Israel conquering east Jerusalem.

The Israeli law is clearly biased towards Jews as it allows them to reclaim the land owned by Jews prior to 1948 but restricts Palestinians to reclaim the land they lost during the war. Over the past few days, there has been constant unrest in Sheikh Jarrah as there are protests taking place. The Israeli police force has repeatedly fired a foul-smelling liquid known as ‘skunk water’ that lingers through the night while attempting to disperse the demonstrators. On the other hand, as a retaliation, Hamas has been attacking Israel. Some reports claim that so far, 3 Israelis and 85 Gazans have died. Amidst this violence, the fear amongst civilians on both sides has been taking a toll, physically, mentally, and financially.