THIS DAY IN HISTORY- 24TH APRIL

This Day in History is DUE’s daily dose of trivia for all the history buffs out there. So sit back and take a ride of all the fascinating things that happened on 24th April!

People are trapped in history and history is trapped in people, and hence, every day has been a significant one in the foibles of history. Now, let’s take a tour of “This Day in History – 24th April”.

1967: Vladimir Komarov became the first man to die during a space mission

Vladimir Mikhaylovich Komarov was a Soviet cosmonaut and aerospace engineer. In October 1964, he directed Voskhod 1, the first spaceflight to carry more than one crew member. He was selected as the solo pilot for the first crewed test flight of Soyuz 1 and became the first Soviet cosmonaut to fly in space twice. However, on 24 April 1967, a parachute failure caused his Soyuz capsule to crash into the ground, making him the first human to die in a space flight. He was only 40 years old when the incident took place.

Sachin Ramesh Tendulkar is an Indian professional cricket player and is considered one of the greatest cricketers of all time. He was born on this day in 1973 in Bombay. At the young age of 23, he was made the captain of the Indian cricket team. In 2012, he became the first cricketer to score 100 centuries in international play. He was the first sportsman ever to receive India’s highest civilian honor, the Bharat Ratna.

Estée Lauder was an American businesswoman and co-founder of the multibillion-dollar cosmetics company Estée Lauder Inc with her husband, Joseph Lauder. She was listed as one of the 400 richest Americans by Forbes magazine in the 1990s. She died on this day in 2004 at the age of 97 due to cardiac arrest at her home in Manhattan, New York.

On this day in 2013, Rana Plaza, an eight-story garment factory in Dhaka, Bangladesh collapsed killing a total of 1,134 people and leaving thousands injured. It is considered the deadliest structural failure accident in modern human history. Just a day before the collapse, the building was evacuated due to security concerns, however, later in the day, Sohel Rana (the owner of the building) said that the building was safe and workers should return. The next morning, the building collapsed. 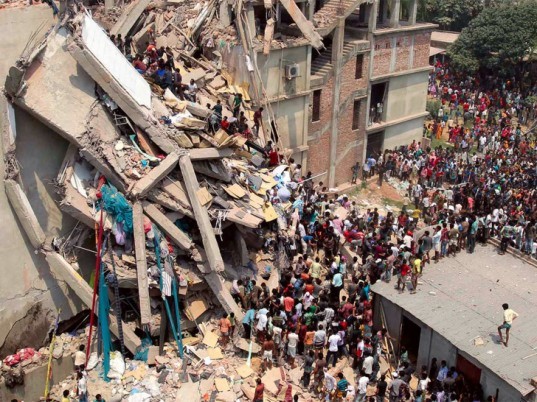