The 72nd Republic Day started with zeal and excitement. Other than the parade at Rajpath we got to witness Kisan tractor rally. Protesting farmers have been sitting at Delhi borders now for almost two months. The day before yesterday, they finally entered Delhi but due to not following the pre-decided path, a clash happened between Delhi police and farmers. The home ministry decided to shut down the internet as a result of the events that entailed. Many entry and exit points of Metro have been closed as well.

Internet Shutdown: How and When?

The internet services were suspended at various borders around Delhi and adjoining areas. In some other areas, Internet speed was restricted to 2G. 26th January was a holiday but the effect of internet shutdown came all upon the classes yesterday. Students from Delhi-NCR were experiencing various problems. Some classes got cancelled, assignment submissions delayed and some went on smoothly while completely ignoring the issue.

Meanwhile, Janya, pursuing Political Science Hons. said that her professors were recording the classes for those who couldn’t attend. 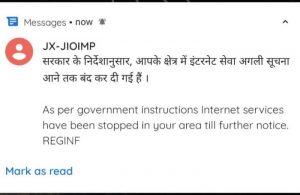 Priyadarshini, a BA programme student from Gargi College said she could send messages but nothing more than that, her internet recovered completely by 10 in the morning, though it affected her submission deadlines. Most of the students with wifi connections faced no issues. The bundle of problems all came upon the shoulders of students dependent on their data connections.

How feasible is online education?

Be it OBE, online classes or assignment submissions, students have faced a lot of problems because of the internet. Which brings us back to the question, how feasible is an online education, does it not favour the privileged?

Some classes went on with continuous joining and leaving of students. Many societies cancelled their meetings. Muskan Khan, majoring in History and Political Science said, “My area which is a part of the NCR region faced a lot of connectivity issues. Even WhatsApp texts were taking some minutes to deliver.”

Internet shutdowns in 2020 cost around $2.8 billion to our country according to reports by Top10VPN, a digital privacy research group. India also holds a record when it comes to Internet bans. Almost 75 times such a ban has been imposed in the last year. With this shutdown, almost 50 million subscribers have been affected. We can hope that issues are resolved and online classes will run smoothly from tomorrow.